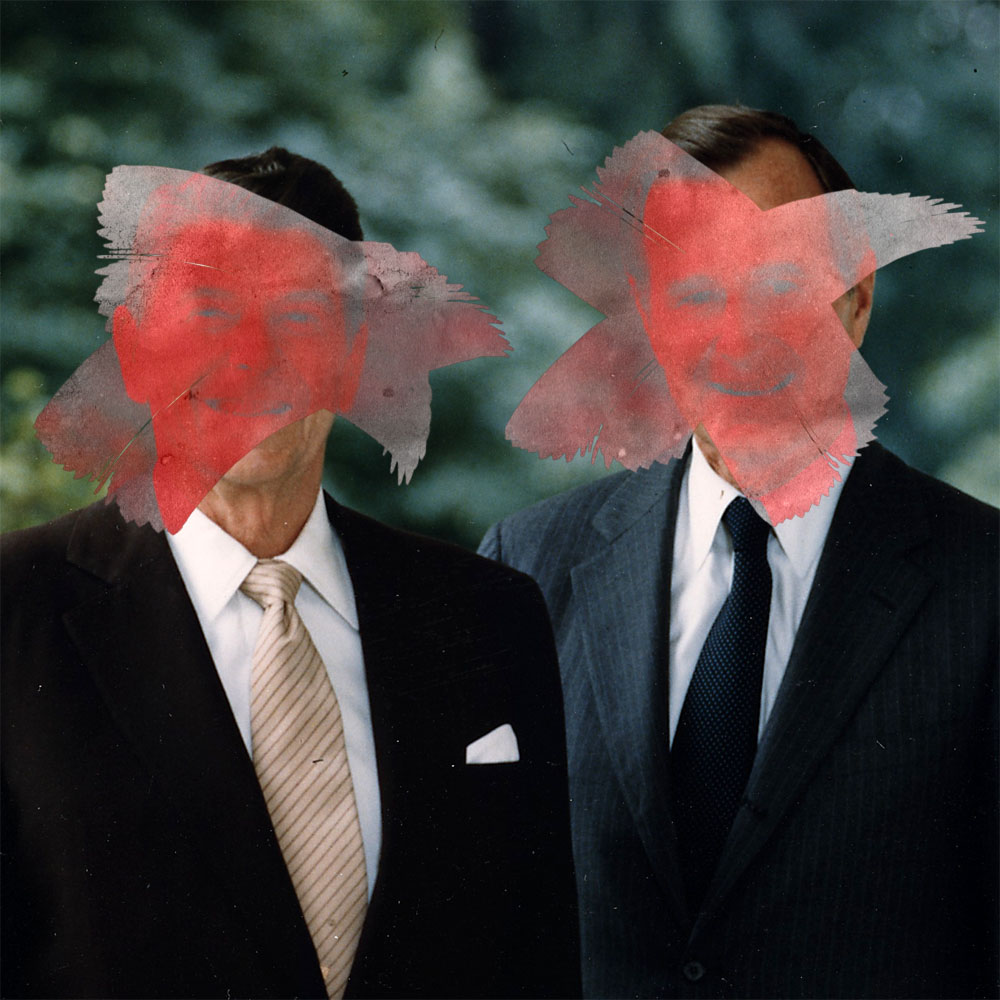 I will never apologize for the United States of America, ever. I don’t care what the facts are.

One must have a strong stomach to digest the hagiographies printed by newspapers everytime one of these monsters of History dies of rotten old age. Most start by emphasizing what a nice grandpa they were, leaving behind a legacy of adoring family and friends. All of it irrelevant, of course. The historical importance of figures such as Bush is as figureheads and executors for the vast forces of capital imposing its will upon the planet. Whether or not he loved puppies and kittens has no importance when contrasted with the piles of corpses he created to make it to the top. Let us then contemplate some of his true and greatest successes.

He started his career serving the oil industry. Thanks to his family contacts and money, he made to millionaire as head of a company specialized in offshore oil drilling. From there, he heads to Congress and then the United Nations.

He was the CIA director between 1976 and 1977, right when operation Condor was starting. Said operation coordinated the repressive forces of the military dictatorships and comprador regimes who ruled Latin America, with the US military and spying apparatus. The operation led to an estimated total of 400 000 people jailed and 60 000 killed, not to mention the usual panoply of kidnappings, torture, rapes and disappearances. Its goal was to purge all left opposition, whether it was hardline marxist-leninist or compromising social-democracy, and thus ensure that the neoliberal measures demanded by the US would be imposed. These kept South America as a plantation-continent, out of which American capital could continue to extract dirt-cheap resources and labor.

In 1988, when Bush was Reagan’s vice-president, an American warship shot down an Iranian passenger plane with 290 people on board. Two years later, when Bush was already president, the ship’s captain was awarded medals for meritorious actions. Bush remains faithful to his word and never apologizes to the Iranian people.

In 1989, the now president Bush relaunches the North-American interventionist fury, after its cool down period following Vietnam, by illegally invading Panama to remove dictator Manuel Noriega. Nevermind the fact that Noriega was previously a good friend to American imperialism, even allowing his country to become the host to the infamous “School of the Americas”, which trained assassins and torturers for South American right-wing regimes. But when Bush needed to improve his approval ratings and banish his public image as a private school wimp, the US media suddenly discovered the existence of human rights violations and drug trafficking in Panama – naturally, the American State already knew of both, since it previously incentivized them.

This media campaign allowed a quick war of aggression – the supreme crime – against a small and defenseless country. 500 to 2 000 civilians died, but Bush was able to play the tough guy and it was thus worth it. In his actions against Panama, Bush was both intelligent and innovative. Intelligent because he undertook a fast operation that resulted in an “easy” win, avoiding the mistakes of Vietnam. Innovative because he discovered the new ideological goldmine of “human rights” as fig leaf to justify foreign interventions, now that communism was receding and no longer useful as an excuse.

In 1990, Bush sees an opportunity to repeat his feat when Iraq invades Kuwait for breaking OPEC oil price discipline and for drilling Iraqi oil fields. For a second time, the United States suddenly realizes that a former ally, who was supported for years with weapons and resources during the Iraq-Iran war in which over a million people died, was in fact an irredeemable monster. In fact, Saddam used chemical weapons against Iran during all 8 years (1980-1988) of the conflict, but since he was only killing Iranians nobody thought of the matter as intervention worthy. Now Saddam was jeopardizing low oil prices during an economic recession – a much more serious crime.

In an episode which would echo in latter propaganda actions against Libya and Syria, the Bush administration used the “Nayirah testimony” as one of its justifications to intervene. In said testimony, an emotional supposed nurse explains before the Congressional Human Rights Commission how Iraqi soldiers were bayoneting Kuwaiti babies in incubators to steal the equipment. Amnesty International, never one to lose an opportunity to support an interventionist narrative, confirms the story. It is later discovered that the nurse is in fact the daughter of the Kuwaiti ambassador to the US and that there is no proof on the ground of the supposed infanticide. But the war proceeds. After pulverizing his enemy of the moment from the air and slaughtering a few thousand more people, Bush once again avoids the prolonged occupation mistake that his son would commit and victoriously pulls out, reinforcing his tough guy image.

The Golf War was the stage for another innovation, “embedded journalism”. Only pre-approved journalists could accompany the troops and move around freely inside the zone of operations. Their reports were also censured by the military before reaching the public. Simultaneously, the military started being much more careful with the information they made available. Thus they ensured that the war was told the way they wanted it told, avoiding another Vietnam mistake.

Bush also infamously dragged his feet regarding the HIV AIDS epidemic, refusing to make resources available for prevention and treatment programs in order to keep his evangelical base happy. A decade after it started, the pandemic had already sent 100 000 Americans to their graves.

In 1991, Boris Yeltsin’s coup dissolves the Soviet Union against the will of the population and with support from his friend Bush. He become the first president to manage the disastrous transition of Russia and the former republics to a savage capitalism which was responsible for millions of premature deaths, the greatest drop in life expectancy ever registered barring wars, epidemics and natural catastrophes, along with a massive population exodus. Bush is thus one of those responsible for the current state of Russia as an oligarchy and for the nuthouse Eastern Europe has turned into. This episode is presented in official hagiographies as “maintaining international stability”. 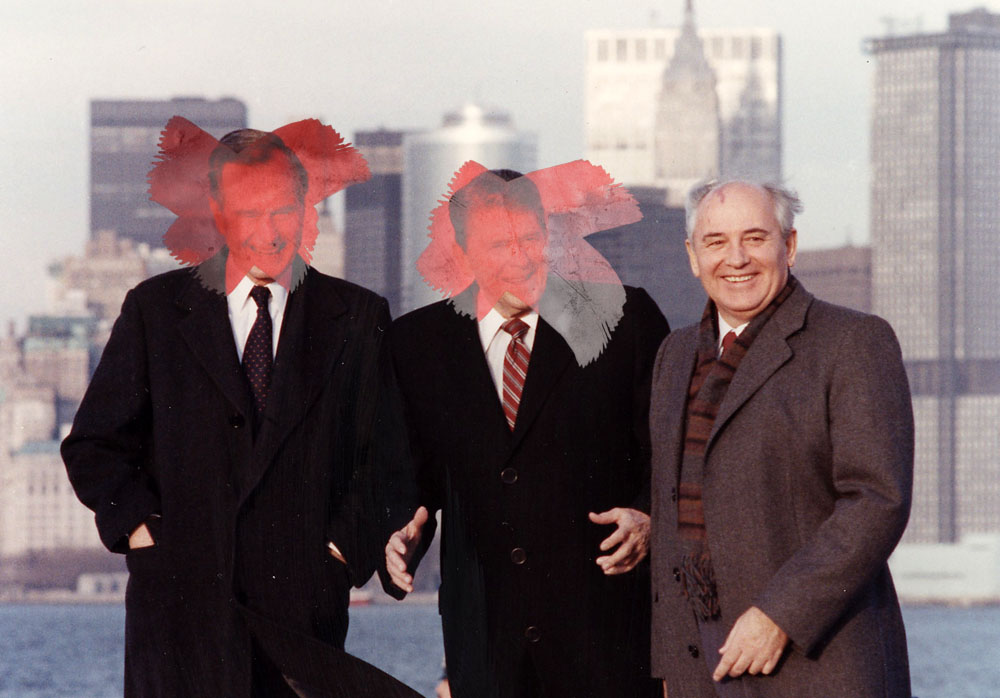 In 1992, Bush signs the NAFTA trade agreement between the US, Canada and Mexico. Its purpose was to tear down the border barriers to US capital in the North-American continent, while reinforcing its control over matters of intellectual property. US industries took this opportunity to flee towards Mexico, where wages were much lower. 700 000 jobs evaporated in the US. Those industries that didn’t flee used the threat of doing so to break unions and reduce compensation and work condition for workers. “Take it or we go to Mexico.”

In Mexico, the tsunami of products from subsidized US industries spelled ruin for farmers and small commerce, displacing millions of people and starting an escape towards big cities or to the north of the border, where these desperate immigrants would become an additional downward pressure on wages. NAFTA was the model for the endless number of other trade agreements that followed.

Bush will now have his image sanitized by media. They will say he was a serious man. When he killed brown people, gays and Slavs while impoverishing the working class, he did so only out of the noblest republican and humanist virtues. And, at least he wasn’t Trump.