As reported by Kaos en la Red and ElDiario.es and according to the unions involved in the strike, the police charges against the Amazon workers happened during Tuesday morning. At least two people were detained, one of them with head injuries resulting from baton strikes delivered by Police Intervention Units (UIP) agents.

According to Douglas Harper, a CCOO union delegate present at Amazon’s warehouse, the police charge began when “a [minor] girl, who was at the gathering with the workers, left the sidewalk”.

When the young woman left the sidewalk and headed to the road “[she] was pushed by an agent”. Then, Harper continues, “several colleagues placed themselves in front of her while disapproving of the police’s attitude”.

It was then that the agents started to charge the workers and the detentions happened. One of the detainees, as the CCOO delegate explains, received a “head blow that broke several teeth”.

The two detainees were accused of attacks against authority.

Reasons for the strike 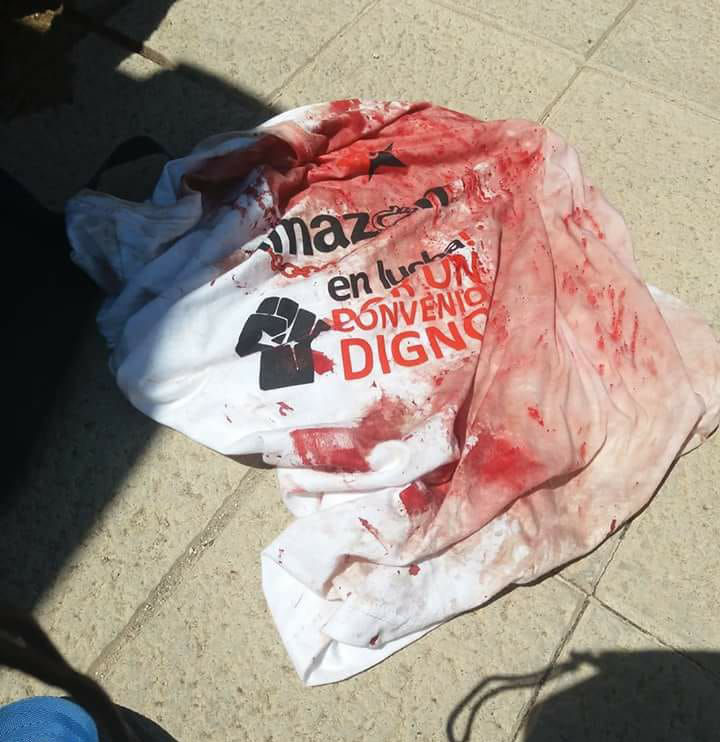 According to CGT (anarcho-syndicalist), the majority union at the multinational electronic commerce logistic center in San Fernando de Henares (Madrid), the three day strike, which partially coincides with “Prime Day” – a 36 hour discount campaign by Amazon –, follows the failure to reach a deal during recent negotiations, in which the company’s administration “made progress in lateral questions” but didn’t attend to the worker’s main demands, related to wage increases, professional categories, wage complements during sick leave and getting a company contract agreement.

70% to 80% of the 1.100 permanent workers adhered to the strike, according to Marc Blanes, delegate for the General Work Confederation (CGT), speaking to El Salto.

He added that the numbers weren’t so high among the 900 temporary workers, due to reprisals suffered after a strike in March, which had massive adherence. After the strike, the electronic retail giant didn’t renew the contracts of over a hundred workers, subcontracted to Adecco and Manpower.

This second episode of struggle at Amazon’s Madrid logistic center received support from other work centers in Europe. A German union called a 24 hour strike last Monday, thus coinciding with Prime Day. In Poland as well, mobilizations were called. Due to the country’s more repressive labor laws, the workers will be at their work posts, but will only do the absolute minimum necessary to avoid being fired.

The Bloomberg Billionaires index has updated the list of the richest people on the planet and placed the founder of Amazon, Jeff Bezos, in first place. After last Monday, the 150.000 million dollars accumulated by Jeff Bezos make him the richest man in modern history. A fortune achieved through low wages and precarious work conditions.